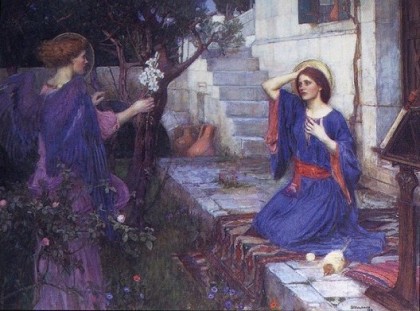 But the angel said to her, “Do not be afraid, Mary, you have found favor with God. You will be with child and give birth to a son, and you are to give him the name Jesus. He will be great and will be called the Son of the Most High. The Lord God will give him the throne of his father David, and he will reign over the house of Jacob forever; his kingdom will never end.”

“How will this be,” Mary asked the angel, “since I am a virgin?”

The angel answered, “The Holy Spirit will come upon you, and the power of the Most High will overshadow you. So the holy one to be born will be called the Son of God.”

The ornament is the Lily. It represents the innocence and purity of Mary, the virgin mother of Jesus.

Thoughts:
The prophecies about a Messiah were rehearsed in the ears of the Jewish people many times as portions of scriptures were read in the synagogues, and must have been the more important as the years under harsh occupation dragged on. A Messiah was needed, and each year without any sign was more difficult to take than the last. Some simply gave up and made life as best they could under unpromising circumstances and limited expectations.

Mary did not stagger in unbelief, as Zechariah did, but she did have a question. “How will this be?” God can answer our questions, it is our unbelief becomes a stumbling block. When God announced great things to Mary, she showed bravery, faith, and humility in readily giving her life as a servant to God’s plan. She received the promise and became an important part of God’s salvation for not only her people, the Jews, but for the whole world. Simply because she accepted by faith, and continued in what God spoke to her.

She wanted what God wanted.

I think this is the same attitude that will see the promises fulfilled in our own lives. As we determine to want what God wants, to humbly comply with His plan and allow ourselves to serve Him, we will see the promises of God come to pass. Mary was young, but she was wise, and we see that in how she responded to Elizabeth:

“And Mary said:
“My soul glorifies the Lord
and my spirit rejoices in God my Savior,
for he has been mindful
of the humble state of his servant.
From now on all generations will call me blessed,
for the Mighty One has done great things for meâ€”
holy is his name.
His mercy extends to those who fear him,
from generation to generation.
He has performed mighty deeds with his arm;
he has scattered those who are proud in their inmost thoughts.
He has brought down rulers from their thrones
but has lifted up the humble.
He has filled the hungry with good things
but has sent the rich away empty.
He has helped his servant Israel,
remembering to be merciful
to Abraham and his descendants forever,
even as he said to our fathers.” ”

It is the time of the favor of the Lord for all who believe… like Mary… that He will complete His good purposes for us, and in us. Will we respond like she did? Or like Zechariah?

Carol: What Child Is This?

For an Advent wreath, this is the pink candle, or the "Candle of Joy". We move closer to the celebration of Christmas, and we may make a choice to … END_OF_DOCUMENT_TOKEN_TO_BE_REPLACED

In our world, we are small, and likewise, in the universe our world is infinitesimal. Many people … END_OF_DOCUMENT_TOKEN_TO_BE_REPLACED

You must admit that God chooses some unexpected places to show up. Bethlehem might have seemed … END_OF_DOCUMENT_TOKEN_TO_BE_REPLACED