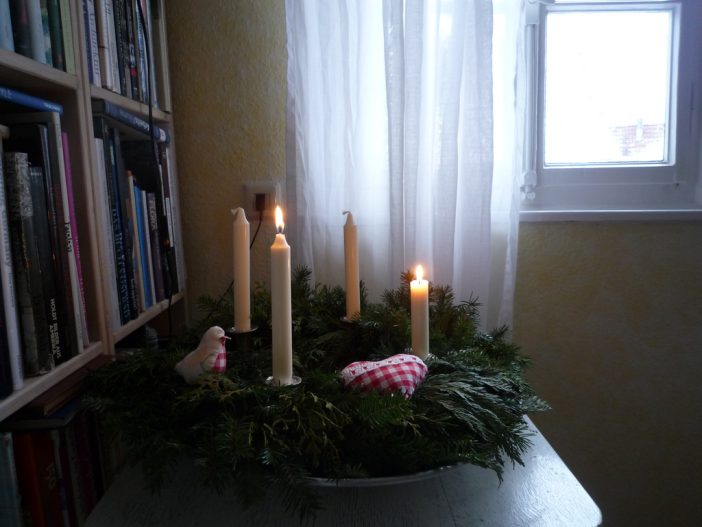 This is the second Sunday of Advent. If you are using the Advent Wreath, the candle which is lit is called the Candle of Peace, or the Bethlehem candle.

Precious Truth: Christ is the Prince of Peace 10 Jacob left Beersheba and set out for Harran. 11 When he reached a certain place, he stopped for the night because the sun had set. Taking one of the stones there, he put it under his head and lay down to sleep. 12 He had a dream in which he saw a stairway resting on the earth, with its top reaching to heaven, and the angels of God were ascending and descending on it. 13 There above it stood the LORD, and he said: â€œI am the LORD, the God of your father Abraham and the God of Isaac. I will give you and your descendants the land on which you are lying. 14 Your descendants will be like the dust of the earth, and you will spread out to the west and to the east, to the north and to the south. All peoples on earth will be blessed through you and your offspring. 15 I am with you and will watch over you wherever you go, and I will bring you back to this land. I will not leave you until I have done what I have promised you.â€

16 When Jacob awoke from his sleep, he thought, â€œSurely the LORD is in this place, and I was not aware of it.â€ 17 He was afraid and said, â€œHow awesome is this place! This is none other than the house of God; this is the gate of heaven.â€

18 Early the next morning Jacob took the stone he had placed under his head and set it up as a pillar and poured oil on top of it. 19 He called that place Bethel,though the city used to be called Luz.

20 Then Jacob made a vow, saying, â€œIf God will be with me and will watch over me on this journey I am taking and will give me food to eat and clothes to wear 21 so that I return safely to my fatherâ€™s household, then the LORD will be my God 22 and this stone that I have set up as a pillar will be Godâ€™s house, and of all that you give me I will give you a tenth.â€

This week marks the beginning of the second week of Advent when we think of the gospel message of Peace.

Peace is a rare commodity in our world. With all the stress and striving, mankind is looking for peace, but unwilling to sacrifice anything for it. We want “cheap” peace. Easy peace.

But peace at any price isn’t peace either.

Today let us think about the Christmas thought that Christ is the Prince of Peace. He brings peace into the hearts of men, where it is most needed. He brings peace and reconciliation between rebellious man and a just God in heaven.

Sometimes God tells us things that we have little concept of, and that reaches far beyond our grasp, but of which we become a part. May we position ourselves to wait quietly, allowing God to impart to us direction, and revelation of His truth and Himself.

Jesse Tree Jacob’s Ladder Ornament #1 by ilonagarden
The carol for today: “Angels from the Realms of Glory”

An additional devotional thought for today.

For an Advent wreath, this is the pink candle, or the "Candle of Joy". We move closer to the celebration of Christmas, and we may make a choice to … END_OF_DOCUMENT_TOKEN_TO_BE_REPLACED

In our world, we are small, and likewise, in the universe our world is infinitesimal. Many people … END_OF_DOCUMENT_TOKEN_TO_BE_REPLACED

You must admit that God chooses some unexpected places to show up. Bethlehem might have seemed … END_OF_DOCUMENT_TOKEN_TO_BE_REPLACED