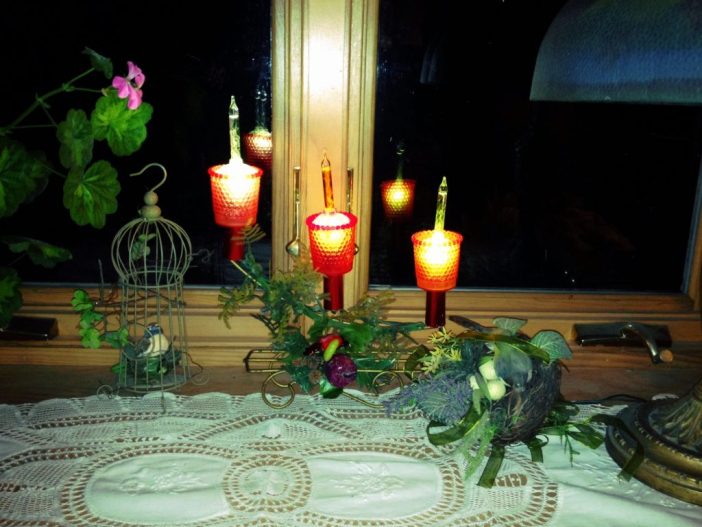 Think back to the era of the sixties… were you born yet?

Starting in 1960, I was seven years old, which means my pre-teen to teenage years took place during that decade.

My mother seemed to add many innovations to our Christmas tree decorating along with some traditional ornaments at that time. We always had tinsel and a Victorian-style angel topper that was a fancy embossed paper picture with spun glass. From that rather traditional beginning, thereÂ soon were reflectors around the bulb lights (still the large size at that time), Â then frosted globe lights, and during a periodÂ in the mid sixties came the “bubble lights”. They were like the Lava lamps in miniature size, and sort of addictive to watch.

For my husband they are favorites that take him back to his Grandmothers living room, where she had a small tree on display with these bulbs.

We all have our connections, to times, places, and people. At no other season do these connections arise more powerfully than at Christmas for so many of us.

Advent is very much about making connection through time with the prophets words, the Lord’s promises, and important people that we become connected with: men and women of faith.

We learn their stories, echo their words, and their symbols imprint our minds with a shorthand of deep spiritual truths.

Sometimes the ornaments, the glitter, and the bows seem like so much ephemera. Sometimes something like the bubble lights are just one more fad that we think is fun or sentimental.

Almost without our noticing something else begins to form in us.

Woven in between our celebrations are memories, both joyous and painful, speaking of love, disappointment, exalted emotions, hopefulness, and the whole scale of our human condition as we connect with our past, with our God, and with each other.

Not every year vibrates with this intensity, but some do, and the accumulation of a life sings with a certain timbre- a note that resounds through us, others lives, and through time.

I think of this as I sit with a cup of coffee in my Christmas mug, and watch the hypnotic bubbles surge up inside the glass tubes of the Bubble lights. Even though they are held by a tacky fifies or sixties era window holderÂ (that my design sense sort of recoils from) …Â it is the connections and memories that make these things precious.

The attached value is from something else altogether.

And those are the thoughts that come from this Christmas element, of an old window decoration that has seen better days, with three dancing bubble lights.

God touches us in many different ways, calling us to himself, and reconnecting us -sometimes through the most inconsequential means- to what matters most.

Make memories this Christmas The brain and the heart are linked.

Luke 1:
5 In the days of Herod, king of Judea, there was a priest named Zechariah,[a] of the division of Abijah. And he had a wife from the daughters of Aaron, and her name was Elizabeth. 6 And they were both righteous before God, walking blamelessly in all the commandments and statutes of the Lord. 7 But they had no child, because Elizabeth was barren, and both were advanced in years.

8 Now while he was serving as priest before God when his division was on duty, 9 according to the custom of the priesthood, he was chosen by lot to enter the temple of the Lord and burn incense. 10 And the whole multitude of the people were praying outside at the hour of incense. 11 And there appeared to him an angel of the Lord standing on the right side of the altar of incense. 12 And Zechariah was troubled when he saw him, and fear fell upon him. 13 But the angel said to him, â€œDo not be afraid, Zechariah, for your prayer has been heard, and your wife Elizabeth will bear you a son, and you shall call his name John. 14 And you will have joy and gladness, and many will rejoice at his birth, 15 for he will be great before the Lord. And he must not drink wine or strong drink, and he will be filled with the Holy Spirit, even from his mother’s womb. 16 And he will turn many of the children of Israel to the Lord their God, 17 and he will go before him in the spirit and power of Elijah, to turn the hearts of the fathers to the children, and the disobedient to the wisdom of the just, to make ready for the Lord a people prepared.â€

One of my mother’s favorite carols:

For an Advent wreath, this is the pink candle, or the "Candle of Joy". We move closer to the celebration of Christmas, and we may make a choice to … END_OF_DOCUMENT_TOKEN_TO_BE_REPLACED

In our world, we are small, and likewise, in the universe our world is infinitesimal. Many people … END_OF_DOCUMENT_TOKEN_TO_BE_REPLACED

You must admit that God chooses some unexpected places to show up. Bethlehem might have seemed … END_OF_DOCUMENT_TOKEN_TO_BE_REPLACED