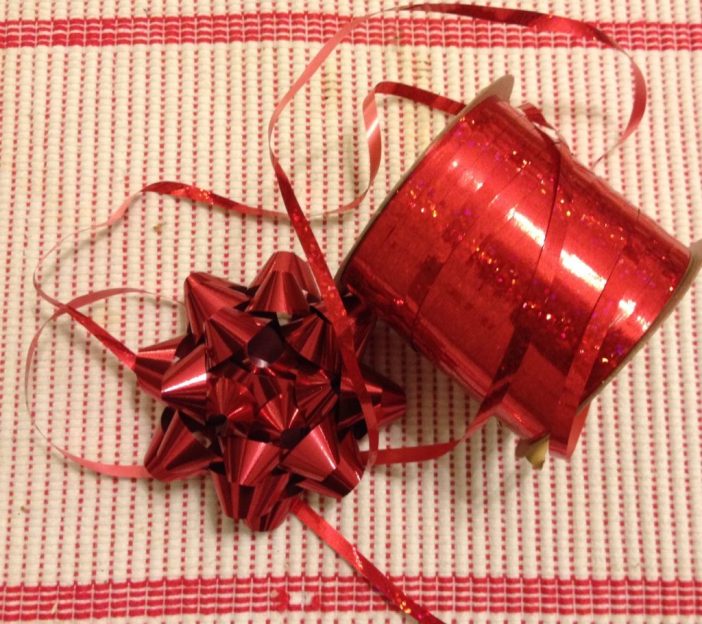 One of the Jesse tree ornaments is a simple, tied, red string or ribbon. It stands for the sign that Rahab was to signal to the Israelites that her household should be spared when they attacked Jericho. Not only was she spared, but she became one of the ancestors of the Royal house of David and ultimately of the Messiah.

But red ribbon shows up everywhere at Christmas time because it is bright and pretty and one of the two main holiday colors.

Red is a color with plenty of significance, which for Christians will be linked with the symbolism for blood and the blood covenant.

The entire story of Rahab is filled with promise for people who are considered “outsiders”. She was a member of the enemy camp, although an outsider even to her own people… living on the wall as she was, making her living as a prostitute.

Who is more unlikely as a candidate for the royal bloodline of the Messiah of a nation, let alone the world?

God makes a great effort in his interactions with us, throughout history, to assure us of his open invitation to all sorts of people, and takes particular care that those who have suffered most from rejection to know they are included.

It is this what the red ribbons remind us of during Advent.

18 This is how the birth of Jesus the Messiah came about: His mother Mary was pledged to be married to Joseph, but before they came together, she was found to be pregnant through the Holy Spirit. 19 Because Joseph her husband was faithful to the law, and yet did not want to expose her to public disgrace, he had in mind to divorce her quietly.

20 But after he had considered this, an angel of the Lord appeared to him in a dream and said, â€œJoseph son of David, do not be afraid to take Mary home as your wife, because what is conceived in her is from the Holy Spirit. 21 She will give birth to a son, and you are to give him the name Jesus, because he will save his people from their sins.â€

22 All this took place to fulfill what the Lord had said through the prophet: 23 â€œThe virgin will conceive and give birth to a son, and they will call him Immanuelâ€ (which means â€œGod with usâ€).

24 When Joseph woke up, he did what the angel of the Lord had commanded him and took Mary home as his wife. 25 But he did not consummate their marriage until she gave birth to a son. And he gave him the name Jesus.

Away In A Manger

fun to do: find some red ribbon and tie it the tree or porch post and discuss the visual impact of red, the story of Rahab, and the genealogy of Jesus found in the 1st chapter of Matthew.

Why is Jewish genealogy important?

For an Advent wreath, this is the pink candle, or the "Candle of Joy". We move closer to the celebration of Christmas, and we may make a choice to … END_OF_DOCUMENT_TOKEN_TO_BE_REPLACED

In our world, we are small, and likewise, in the universe our world is infinitesimal. Many people … END_OF_DOCUMENT_TOKEN_TO_BE_REPLACED

You must admit that God chooses some unexpected places to show up. Bethlehem might have seemed … END_OF_DOCUMENT_TOKEN_TO_BE_REPLACED